You’d be forgiven for not knowing the location of this little gem of an island. It’s surprisingly easy to reach and has a delightful personality all its own.

Formentera is one of the Balearic Islands to the east of mainland Spain, in the Meditteranean. It’s the little sister island to Ibiza and is only a 30-minute ferry trip away.

Here’s a few facts and figures:

Discovery Walking Guides carried out an intensive cartographic survey on Formentera a few weeks back and design of the new Formentera Tour & Trail Super-Durable Map is well under way.

For full details about the new Formen 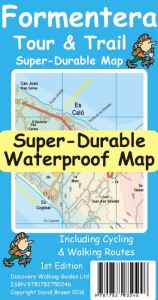 How would you like to be part of the launch of this exciting new map project? For a modest pledge you can help this project to fly – and receive free maps too.

There’s still time to be a part of this exciting project.

2 responses to “Formentera? Where’s that? UPDATE”

It would be great to see your comments/questions :-) Cancel reply

This site uses Akismet to reduce spam. Learn how your comment data is processed.

You Could Be In The Picture!

Want to look back?